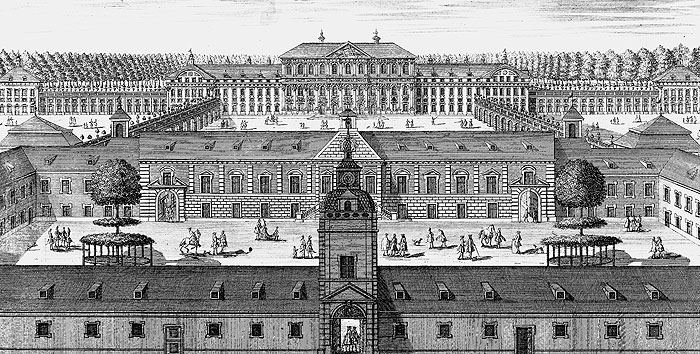 Schleißheim palace complex was founded by Duke Wilhelm V of Bavaria (1548-1626), who in 1597 purchased the isolated moorland farm of Schleißheim with its St Margaret's Chapel for a large sum of money from the Freising Cathedral chapter. 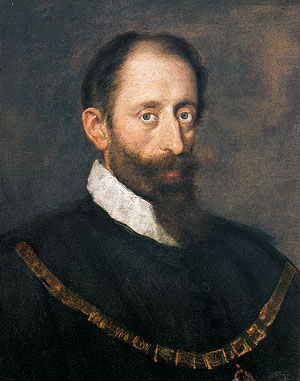 Wilhelm renounced the splendours of court life at an early stage, devoted himself to religious meditation and in 1598 finally abdicated in favour of his energetic son Maximilian. The founding of Schleißheim reflected his personal inclination towards pious contemplation.

In the period from 1598 to 1600 Wilhelm had an estate and a manor built within the complex, which was surrounded by small hermitages and forest chapels. The duke, who had no intention of altering the character of the property as a farm, extended its activities with a stud farm which supplied his stables. Schleißheim beer and Schleißheim cheese were produced. Attracted in particular by the profits from the farming business, Maximilian I (reigned 1598-1651) acquired the complex from his father in 1616 in return for a life annuity. 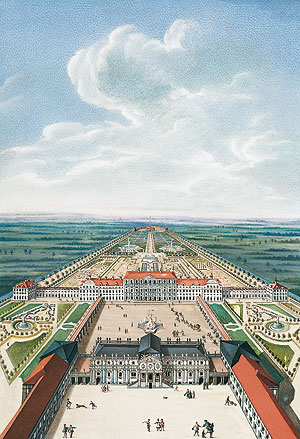 From 1617 Duke Maximilian had his father's manor replaced by a palace designed by Heinrich Schön the Elder, the present Old Palace. Most of it was destroyed during the Second World War, but in its reconstructed form the Schleißheim Old Palace is still the best example of a country palace in the style of villa architecture from Veneto in Upper Italy.

A new chapter commenced with the reign of Elector Max Emanuel from 1680 to 1726. Under his rule the magnificent country seat of his predecessor centring on the Old Palace became a pompous residence reflecting the spirit of absolutism.

He began in the late 17th century by building Lustheim with its two pavilions, a perfect example of a German "casino" in the Italian style. It was the first secular building north of the Alps to be decorated with large ceiling frescoes, heralding a new trend.

With the layout of its rooms, the monumental New Palace that was built after 1700 is one of the best examples of a European residential palace. The ceiling frescoes marked the beginning of a new epoch in South German ceiling painting, and the interiors, especially of the festival rooms and the state apartment with their stucco-work decoration, carved panelling and in particular their furniture, are some of the most magnificent of their kind. 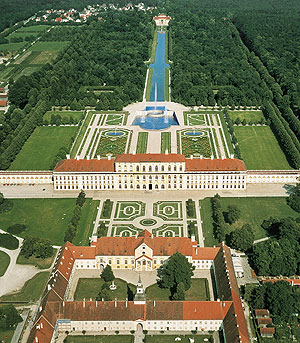 The Schleißheim park was designed in strict alignment with Lustheim and the New Palace and is one of the most important baroque gardens in Europe.

It was initially influenced by Dutch garden design, and subsequently extended by the French garden expert and waterworks engineer Dominique Gerard in the French baroque garden style. With his embroidered parterres, pools, fountains and cascades he created a unique design, the basic features of which have remained unchanged.

The ensemble consisting of the New and Old Palaces, Lustheim Palace and the extensive baroque garden is a splendid example of court architecture and garden design from the 17th and 18th centuries.

Plan of the Schleißheim palace complex