The original farm of Schleißheim was acquired by Duke Wilhelm V (reigned 1579-98), who in 1598 built a simple mansion on the property, the so-called "Wilhelmsbau". This formed the centre of a symmetrical complex which gradually evolved around various courtyards of different sizes, and was only completed during the reign of his son, Maximilian I. The central gate and clock tower date back to the first building period; the larger of the bells in the tower is dated 1602. 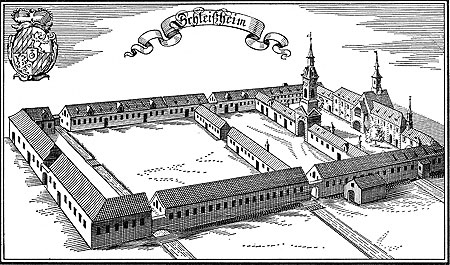 The Old Palace, engraving from A. W. Ertl's "Kurbayerischer Atlas", 1687

Inspired by the architectural tract of Vincenzo Scamozzi which came into his possession in 1616, in which the most important pupil and colleague of Andrea Palladio set out his ideas on Italian villa construction, Maximilian set about rebuilding the Schleißheim manor.

In 1617 the building, which was not yet 20 years old, was demolished down to the cellar walls, and the new building was put up in a very short time. There is some uncertainty about the identity of its architect; it is possible that it was Hans Krumper, working together with the architect Heinrich Schön, and the patron Maximilian almost certainly had a major influence on the project. Peter Candid from the Netherlands was largely responsible for the decoration of the palace rooms with stucco-work and frescoes. The palace was probably completed in 1623.

In the Second World War almost the entire roof and many of the palace rooms were destroyed in air raids; reconstruction could only be started in 1970. Today most of the construction above ground is new, but the western vestibule and the adjoining hall wall, complete with their decoration, are original, as is most of the cellar vault. Most of the stucco decoration of the former chapel, the Wilhelmskapelle, has been preserved.

In 1986, as a result of the reconstruction, the palace was given a new function and now houses a museum of modern religious folk art from all over the world (Gertrud Weinhold Collection). This can be seen in the rooms in the north part of the main tract and the basement as well as in the northeast wing, which has been restored externally in its original form. 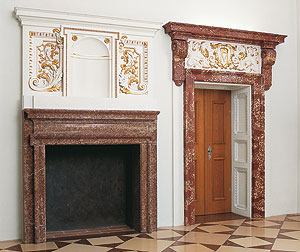 Fireplace and door, south wing of the Old Palace

A new room division was created for this purpose. The middle hall with its original west wall was reconstructed in every detail. Restoration of the rooms on the south side of it, which involved measuring and taking moulds of all the stucco motifs in the ruins, was completed in 1989. This suite of rooms can thus be seen again in its original form, but without the ceiling pictures and the original colour.

The vaulted basement rooms, most of which are original, can also be visited as part of the museum in the Old Palace. Open sections of wall and explanatory texts show the visitor that most of the lower rooms here are remains of the old "Wilhelmsbau", whereas the higher, outer cellar rooms are part of the new building created by Maximilian.

The adjoining building tracts on the west side, which form symmetrical rectangles around large courtyards, are also part of the Old Palace complex. In front of the palace is the present "Maximilianshof" with residential tracts on two floors. The gate with its clock tower leads into the large "Wilhelmshof" with farm buildings dating back to around 1600, most of which, however, were renovated in the 18th century. 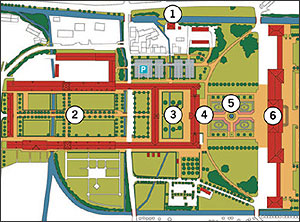