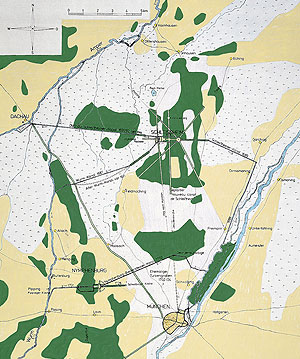 The baroque canals built for decorative and practical purposes in the Court Garden were commenced in 1689 under Henrico Zuccalli. To provide water for the canals in the garden, an entire system of feeder canals had to be constructed, which branched off to Schleißheim from a number of water courses.

Schleißheim was first supplied with water from the Schwabinger Bach (brook) and the River Isar via a canal named the "Schleißheim Canal", which first ran north and then turned at right angles towards Lustheim. Another feeder canal, the "Karlsfeld Canal", was constructed from the River Würm in the southwest, beginning north of Allach (near Karlsfeld).

The canal from the Isar enters the park near Lustheim, forks and forms a semicircle round the little palace. The canal along the south side of the garden is supplied via the Karlsfeld Canal with water from the Würm, which flows from Schleißheim to Lustheim.

In the park's northern canal, on the other hand, the water (mainly from the Isar, via the Schleißheim Canal but also from the Würm via the southern side canal) flows in the other direction from Lustheim to Schleißheim Palace and from there into the "Dachau Canal" between Schleißheim and Dachau Palace, which was built in around 1690. The flow of water and the operation of this canal system is regulated by locks.

At the beginning of the 18th century, finally, Max Emanuel commissioned the so-called "Turkish ditch", which was to form a direct link between his town residence and Schleißheim, but the straight extension which was to lead up to the palace, the "nouveau canal de Schleißheim", was never completed. In the early 19th century the Turkish ditch was filled in. The name is in fact erroneous, as the Turkish prisoners of war had already been exchanged in 1699. The "Turkish ditch" would also have provided a canal connection from Nymphenburg via the Georgenschwaige to Schleißheim. 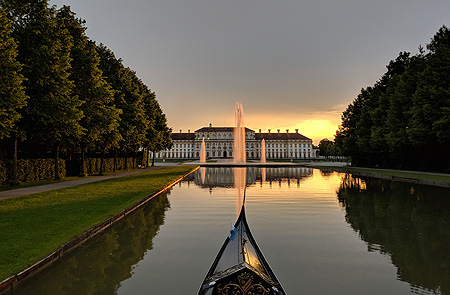 Schleißheim New Palace with gondola on the central canal

These extensive canals, which involved massive amounts of earth-moving, were built in part – up until the Peace of Carlowitz in 1699 – by Turkish prisoners of war; subsequently the work was mainly carried out by troops from the Munich garrison. The canals were put to use as soon as they were completed to transport building materials for the palace; at the same time the court used them for pleasure trips, for which a number of Venetian gondoliers were engaged.

The canal system between Schleißheim, Nymphenburg and Dachau is unique in Central Europe. Even though not all the canal sections have water in them throughout and in places some of the avenues have become overgrown, the system of canals and the views along them is still a dominant feature of the landscape north of Munich.