On the occasion of his marriage to the Austrian emperor's daughter Maria Antonia in June 1685, the young elector Max Emanuel of Bavaria (reigned 1680-1726) commissioned his court architect Henrico Zucalli from Grisons to build the hunting lodge and garden palace of Lustheim. Zucalli based his design on the Italian casino buildings popular since the early 16th century, which were to be found in a wide variety of locations outside residences. 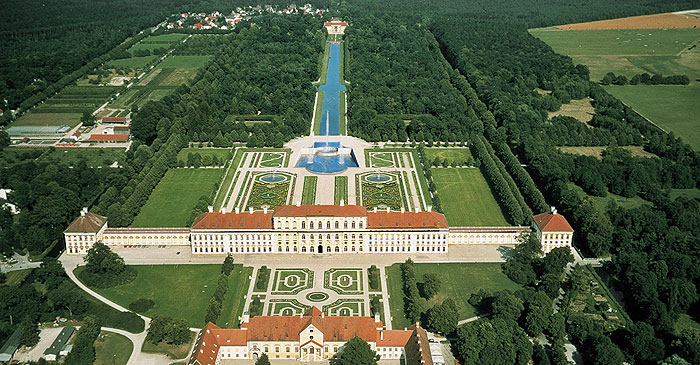 Aerial view of the Schleißheim palace complex, with Lustheim Palace in the background

Located in the central axis of the (Old) Palace, at a distance of around 1,300 metres from it, Lustheim was to form the centre of its own gardens. At the same time it incidentally acquired the function of a "point de vue". This double function is indicated by a plan of Henrico Zuccalli's dating from 1684. Although the "New Palace" does not yet feature in the plan, it can be seen from the geometry of the gardens that this was already envisaged. 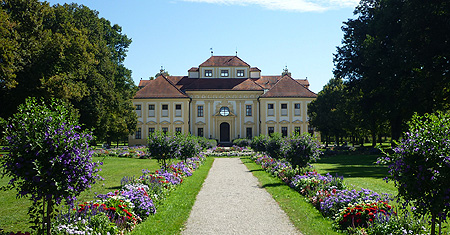 The brick shell of Lustheim Palace was built very rapidly. Inside, a festival hall occupies two floors, with the apartments of the elector and the electress leading from it on either side.

The upper floor originally had simple rooms for the court, and in the basement were the kitchen and lounges for the servants. The small hall right at the top above the roof of the middle tract was evidently specifically requested by the elector. From here there was a good view of the surrounding countryside and the nearby woods with their hunting rides. 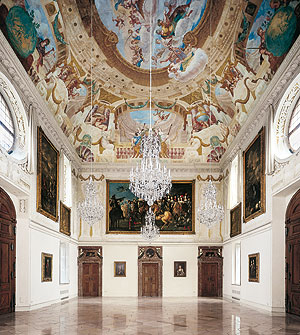 The important ceiling paintings in the hall and the electoral apartments glorify Diana, the goddess of hunting. This is the first cycle of secular painting in Bavaria and was created in 1686/87 by the artists Francesco Rosa, Giovanni Trubillio and Johann Anton Gumpp.

The walls of the rooms in the two electoral apartments were originally covered with damask in various colours, complemented by window and door curtains in similarly coloured materials, but none of this survived the 18th century. What has remained are the ceiling frescoes, the frieze with its painted ornamentation and the painting on the upper part of the hall walls. 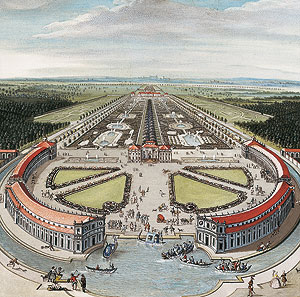 Large colonnades forming a semicircle to the east behind Lustheim were also begun simultaneously with the palace. They were intended to connect the two pavilions to the north and south with Lustheim Palace, forming a wide arc interrupted only by the paths and the central canal.

They were to house orangeries, festival rooms and apartments for guests. The want of appropriate building techniques and the sheer size of these tracts however caused numerous problems. After the death of Zuccalli and Max Emanuel, the circle buildings fell into ruin and in 1741 were finally demolished. The large orangery palace complex was thus reduced to a fragment.

In spite of this loss at an early stage in its history, the Lustheim palace complex forms a self-contained unit, consisting of the palace in the centre and the two pavilions outside the ring canal.