The Schleißheim distillery is continuing a long tradition. Until the 1920s, Schleißheim had a palace brewery, in which fruit schnapps was also distilled. The extensive orchards of the palace are a reminder of this era. At the beginning of the last century, the beer from the palace brewery and the Schleißheimer schnapps enjoyed an excellent reputation not only among local customers. In 1926, however, the palace brewery was taken over by the Munich Hackerbrauerei, which closed it down soon afterwards.

The distillery rights remained in the possession of the palace administrative office. In the 1960s schnapps distillation was resumed, although on a small scale. The products were only sold locally, but never regained their former success, and the quality was not always convincing. A fire in the distillery which destroyed the still and most of the documents then for a while put a end to schnapps production in Schleißheim. 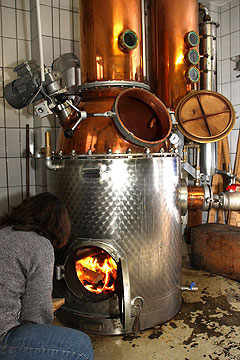 In 2007 a new distillery was set up by the head of administration Max Kirmeß as one of his last official acts before he retired in order to re-establish the long-standing tradition of Schleißheim Palace schnapps. A further goal of the administrative department was to offer products of particular quality with the new distillery, extended distilling rights, innovative new recipes and new brands and by this means also advertise the Schleißheim palace complex.

When the first plum schnapps was made in the new distillery, it could not be foreseen how successful the new schnapps varieties would be. Today the bottles of Schleißheim Palace schnapps sold in the museum shop in the New Palace are a popular souvenir with visitors from all over the world.

All the varieties of Schleißheim Palace schnapps are distilled exclusively from untreated fruit from the historical fruit trees of the palace complex.